Now that I'm going to be published (yay!) I figure I should confess a very big secret...

I don't write my own stories.
I dictate them and my assistant types them out for me. Sometimes, he even adds plot twists and details when I'm not paying attention. All the great stuff in any of my stories was probably not my idea or doing. Credit should most likely be given to Rooney, my American Bulldog. Here's proof... 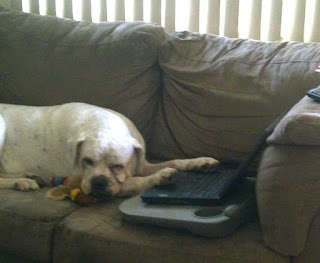 He's bored in this pic, but that's because he's tired of merfolk and selkie tales. He wants a werebulldog story. I keep vetoing that idea. Sorry, Roo.

Continuing the theme of sharing things, I got tagged in a meme by Taryn Tyler (Taliesin).
I haven't done one of these in a long time, and since Taryn rhymes with Karen I felt obligated to participate. so here we go...

Are you a rutabaga?

When was the last time you ate lion meat?

Never. However, I did eat one of those massive "turkey" legs at Disney World once and I'm convinced no turkey could ever get that big. So it could have been a lion, and if so, I feel awful about it. No one should eat the king of the jungle.

Upload a heartwarming picture of something that makes you smile.

See above pic of Rooney.

If you could go back in time and kick the crap out of someone, who would it be?

My list is LONG. I can only pick one? Wait, no, violence is bad. And changing events of the past can cause cataclysmic damage in the present and/or future. (But okay, maybe Hitler. I'll take my chances on altering the universe if I could spare so many from torture and pain.)

Name one habit that makes other people plot your demise.

My sarcastic sense of humor. Most people interpret this as me being a you-know-what, but I swear I'm not. I just hung out with a lot of sarcastic people growing up, so it's an instilled social behavior that runs very deep.

What song would you like to be playing while you are kicking the crap out of someone?

What's up with the violence questions? I'd want What a Wonderful World by Louie Armstrong. The positive message and feeling would cancel out the negativity of the event and keep me in a ninja zenlike state of mind. (Picture it, me beating the crap out of Hitler in slow motion while the following plays...The colors of the rainbow, so pretty in the sky, Are also on the faces, of people going by. I see friends shaking hands, sayin', "How do you do?" They're really sayin', "I love you."
*big grin*

Where da muffin top at?

The top of my jeans. I've been eating way too much cake lately.

Why does evil exist?

So that good can defeat it.

What the chiz are you thinking right now?

That I'm running late. And that I thought it was schiz, not chiz. But who am I to question the spelling?

Have a great week! xo
Posted by kah