GRASPING AT ETERNITY is FREE!

Book 1 of my Kindrily series, Grasping at Eternity, is now free on most retailers!
To my international peeps, hang tight, it will be free in your countries soon.
(Just waiting for price match to kick in.) 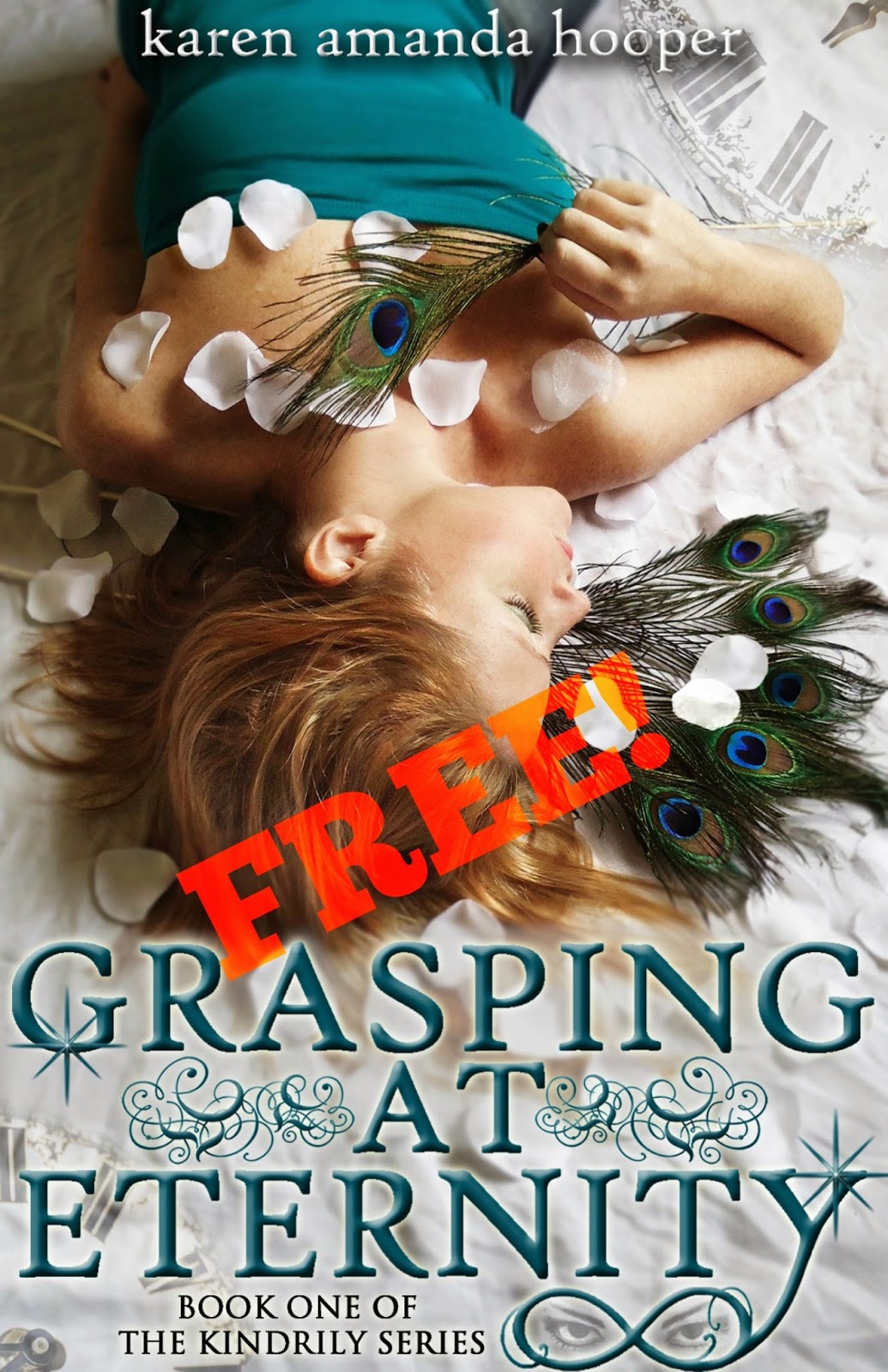 I'm shocked that so many have already snagged a copy, but SUPER grateful for every download. The surge has allowed me the honor of making the top 10 list on Amazon for YA Paranormal & Fantasy Romance. I feel like a rockstar hanging out with some of my fav authors like Sarra Cannon, Addison Moore, and Chanda Hahn. Go grab their books too if you don't already have them! 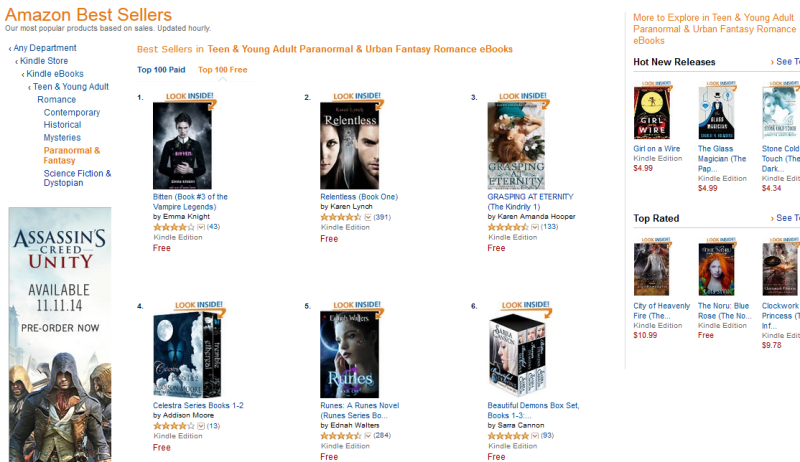 Have a fabulous week! And Happy Reading!
Posted by kah 4 comments:

Halloween is rapidly approaching. To get in the mood, how about a great zombie and vampire book? Check it out! 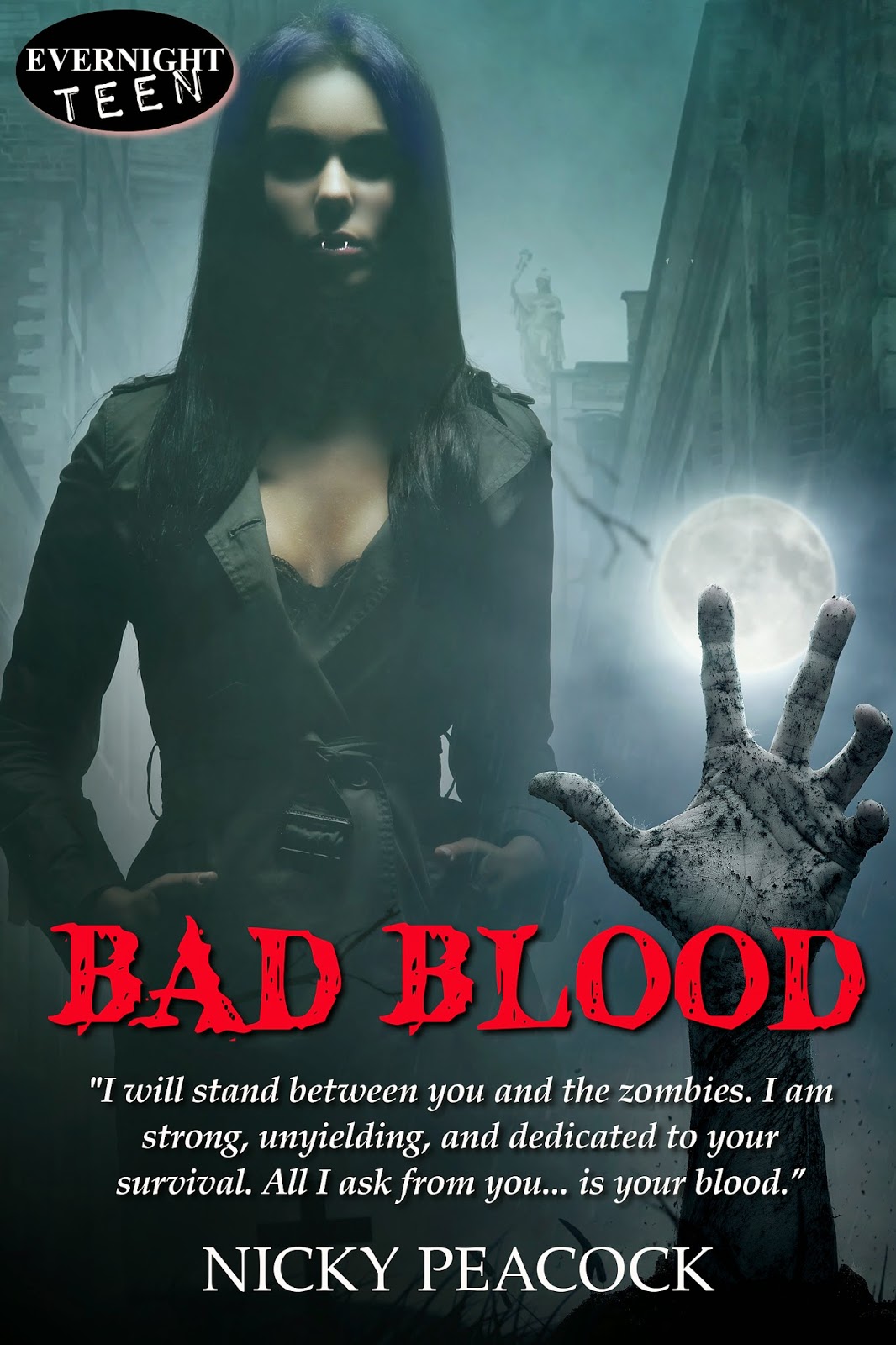 “I am Britannia. I am your protector. I will fend off the hungry hordes of undead hands that reach toward you. I am your steadfast defender. I will stand between you and the zombie masses as they try to taste your flesh. I am strong, unyielding, and dedicated to your survival. All I ask from you… is your blood.”
A five-hundred-year-old bloody game of vengeance will need to be put on hold if vampires are to survive the zombie uprising. Britannia and Nicholas, bitter enemies and the only two surviving vampires left in London, have to work together to save un-infected humans and deliver them safely to a vampire stronghold in the Scottish Highlands. Unable to drink the zombie ‘bad blood’, the remaining vampires need the humans to stay alive. But will the vampires tell the survivors who they are and what they want from them? Will Britannia be able to hold back her vengeance for the greater good? Is survivor Josh the reincarnation of Britannia’s murdered true love? And can she bring herself to deliver him to the ‘safe’ hold? Survival instincts run deep, but bad blood can run deeper.

I guess I’ve always been a storyteller, not in a ‘liar liar pants on fire’ kind of way, although I do work in advertising! When I was little, kids would crowd around me in the playground and I’d tell them tales of blood soaked horror filled with vampires, werewolves, ghosts and more. Yes, most would consider me a disturbed child, but my playmates couldn’t help themselves, they’d huddle around me every break time like an ancient tribe feeding off the fear; and that’s how I learned that horror stories hold a certain power, no matter what some might say, everyone is addicted to a good scare, especially if it is somewhat rooted safely in unrealistic beings… or are they unrealistic?
Writing was really a natural progression. Right now I’m obsessed with writing: a YA Urban Fantasy novel, a Paranormal Romance novella series, and several short horror stories! So I’m currently living in a functional fiction coma – and loving it!
I’ve so far been published in 5 countries: USA, UK, Australia, Ireland and Canada and had short stories included in 40 anthologies with over 17 publishers.

Blog: http://nickypeacockauthor.wordpress.com/
Twitter: https://twitter.com/nickyp_author
Face Book Page: https://www.facebook.com/NickyPeacockYaBooks
Amazon Author page: http://www.amazon.com/Nicky-Peacock/e/B007UH2ACW/ref=ntt_dp_epwbk_4
Good Reads: http://www.goodreads.com/author/list/4958833.Nicky_Peacock
Pinterest: http://pinterest.com/nickypauthor/
Tumblr: http://nickypeacock.tumblr.com/
Excerpt:
We ran to the hospital. On the way, we encountered hardly anyone, alive or dead. Where were they all? When we arrived at the hospital car park, I understood. Zombies were pack animals. A massive crowd of them were crammed in and around the main building like they were waiting for a concert to start, all barely paying attention to their surroundings and seemingly swaying against the force of gravity. The other thing was the smell. When watching horror films filled with shuffling zombies, the horror came from their ghastly looks—the reminder that death has a tight grip on us all, well, most of us. But what the filmmakers should focus on—if they could—was the acidic rank odor zombies gave off. They had been dead barely twenty-four hours. It took a normal human body at least thirty-six hours to really start to smell, and that was with a vampire’s heightened senses. These guys smelled like they’d been out in the sun for three weeks covered in rubbish and besieged by wily maggots. They were mostly intact, though. Maybe this hospital had been Zombie Ground Zero. Most had turned so quickly their comrades hadn’t had time to feed.
“Maybe we should try a less populated target.” Nicholas twitched his nose and turned away from me to dry retch.
“Maybe you should grow a pair.”
“Maybe you should act like a lady.” He now had his hands on his hips, squaring up for yet another argument.
“Acting like a lady isn’t going to help now, is it? What do you want me to do? Drop my handkerchief in front of the zombies and watch them fight one another to scoop it up for me? Moron!”
“Always to the ‘nth degree with you, isn’t it?”
“Shut up. Look, the doors are holding, and they’re outside, not inside, which means there must be some people left in there alive to have barricaded this place so tight.”
“Or maybe there are just more zombies in there.”
“Well, there’s definitely a blood bank in there, and that’ll help matters no end!”
Nicholas looked thoughtful then nodded. He of course didn’t want to actually say aloud that I’d had a good idea. “So, how do we get past them?”
I assumed it was a rhetorical question, so I started down to the car park entrance, where most of the zombies were mobbing. I opened the outer door as quietly as possible.
“Ladies first,” Nicholas whispered in my ear.
“I thought we’d agreed I wasn’t a lady.” And with that, I shoved him as hard as I could into the throbbing throng of zombies.
Published by Evernight Teen http://www.evernightteen.com/
Posted by kah 4 comments: