And The Winner Is...

Finally, my teddy bear has been returned (a little shaken up, but physically unharmed) so I can announce the winner of my signed copy of Paolo Bacigalupi's SHIP BREAKER. Well, not MY copy. I'm keeping my personalized one for myself and will never ever give it away. But the winner of the OTHER signed copy is...

One of the only guy's I've ever seen pull off the I-ooze-coolness-even-with-a-cig-hanging-outta-my-mouth look. He even left a really cool comment that would be a great plug for the book and I feel it's worth quoting:

Wow. What an amazing premise. Sounds dystopian, and fantastic and beautifully romantic all at once. Just the idea of a lovely old wooden ship suddenly showing up in this down trodden world of beached steel behemoths drew me in instantly.

So congratulations to Matthew! And also, special thanks to Ms. Honey Hostage--er, I mean, Carol Valdez Miller for plugging my contest and boosting my followers to over 600. And WELCOME to all the new friends who found me through Carol's blog. I'm sorry I didn't have 50 of these books to give away because I'd love to give everyone a copy. BUT, she is giving away SHIP BREAKER and some other great titles, so head over there and enter if you haven't already.

Thanks to everyone who commented and entered. Happy Friday!
Posted by kah 25 comments:

The Good News and the Bad News

Bad news should always come first, so here it is: I'm a liar.
I'm not choosing a SHIP BREAKER winner today. I will choose the winner on Friday. It's a long, dark and twisty story involving bartering and blackmailing, but trust me; lives may or may not have been threatened so I made this decision for everyone's safety.

The good news: Carol is giving away a CRAP LOAD of books over at her blog. One being SHIP BREAKER. So now you have TWO chances to win SB or you could win some other great ones. And if you haven't entered my contest yet, now you can. Just click here.

I promise I will choose the winner on Friday. Please forgive me.

(Dear Ms. Honey Hostage, if you're reading this, please return my loved ones ASAP--preferably unharmed.)
Posted by kah 11 comments: 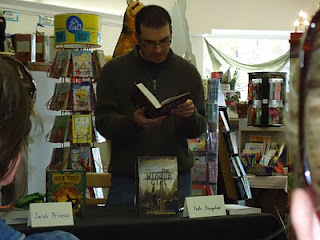 One of the highlights of World Fantasy Convention was meeting
Paolo Bacigalupi and hearing him read an excerpt from
SHIP BREAKER.

Paolo has won many awards such as the Hugo, Nebula, Locus, and others, but SHIP BREAKER is his first YA novel and it's a 2010 National Book Award Finalist. The cool part: He's still humble, and super friendly.

SHIP BREAKER is dangerous. And dirty. (Not in the way you're thinking--get your mind out of the gutter.) As soon as I started reading, the story and characters sucked me in as powerfully as if I'd fallen into an ocean of oil. I live on the Gulf Coast, so it really hit home for me. 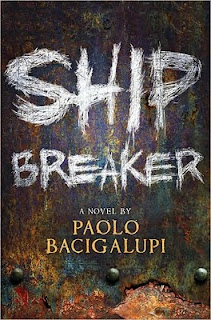 Here's the lowdown:
In America's Gulf Coast region, where grounded oil tankers are being broken down for parts, Nailer, a teenage boy, works the light crew, scavenging for copper wiring just to make quota--and hopefully live to see another day. But when, by luck or chance, he discovers an exquisite clipper ship beached during a recent hurricane, Nailer faces the most important decision of his life: Strip the ship for all it's worth or rescue its lone survivor, a beautiful and wealthy girl who could lead him to a better life. . . . 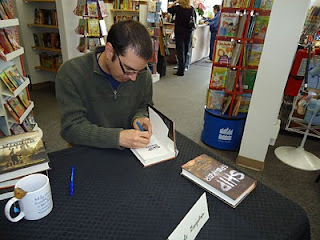 You can't have my copy. Ever.
But you can win your own signed copy.
To enter, simply be a follower of my blog and leave a comment.
Tweet about it (@Karen_Hooper
Link: http://tiny.cc/SHIPBRKR ) sidebar mention it, post about it etc, and get 5 extra entries for each mention.

I will announce the winner Friday morning (Nov 19th).
It's open to all you international folks too!

Trust me; YOU WANT THIS BOOK.
Posted by kah 54 comments: 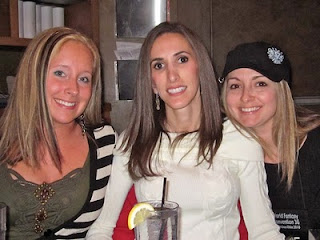 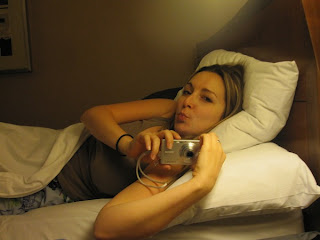 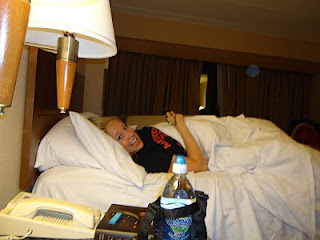 5am will be here before you know it. Hope to see you there.
Posted by kah 32 comments: