MY COVER REVEAL FOR DANGEROUS DEPTHS

Ready to see the cover of DANGEROUS DEPTHS? Here it is... 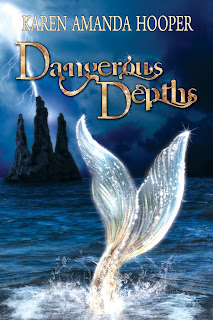 Isn't it fintastic?
It was created by the same fabulous designer who created the TANGLED TIDES cover, Melissa Williams.

Book 2 of The Sea Monster Memoirs will be releasing a little bit earlier than originally announced. The new release date is November 20th, 2013. Only a couple months away!

Some of you may have read my post about Rhemalda Publishing going out of business, and while I'm very sad about losing them as the publishers of my sea creature books, the series will continue. However, I'll be making some minor changes to TANGLED TIDES and releasing the "second edition" this winter, so that means the Rhemalda first edition will be a collector's item. (You'll probably never sell it for much on Ebay, but at least it will have sentimental value.)

To celebrate the beautiful DANGEROUS DEPTHS cover, I'm giving a way a signed paperback of the first edition. The winner will also receive an ebook of DANGEROUS DEPTHS the day it releases.
Enter here:
a Rafflecopter giveaway

Some readers were surprised to hear there's a sequel to TANGLED TIDES. Some believed I wrapped up the story nice and neatly, so what could book 2 be about? Well, things didn't end as happily as Yara and Treygan thought. Check it out:


The gate to the sea creature realm is finally open. Rownan assumes the worst is behind him when he returns home after years of waiting to be reunited with his wife, Vienna. Only to find out that Vienna didn’t wait for him. She traveled to the evil realm of Harte years ago, hoping the legend of another gateway to Earth’s realm was real, but she was never heard from again. Rownan claimed he’d go through hell to be with Vienna, and now he must prove it.


Yara wanted to bask in the glow of her happily ever after in the magical realm of Rathe. She planned to explore Medusa and Poseidon’s world and dive deeper into her relationship with Treygan, but as the new leader of Rathe, her powers are needed to save more than one member of her own kind. Treygan vowed to always be Yara’s guardian, but long ago he also swore to go any lengths to protect his brother Rownan. Now, he must fulfill his promise to both of them.


Rownan, Yara, and Treygan are about to put their lives and souls at risk by traveling to the most dangerous realm of the worlds. Love should conquer all, but no one has ever conquered Harte.

Huge thank you to Melissa Williams on her magical and fabulous work. 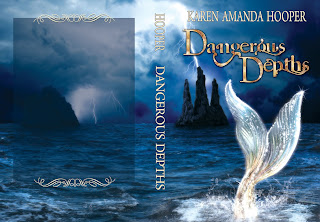 And many thanks to all the readers and supporters of my books.
My gratitude is deeper than the oceans.
Posted by kah 19 comments:

"Good bye may seem forever. Farewell is like the end, but in my heart is the memory and there you will always be." ~Walt Disney

Rhemalda Publishing gave me my start in this wild and amazing world of books. They loved and believed in my story, Tangled Tides, when no other agent or publisher did. They even looked past its hideous original title, A Motley Mermaid. *hangs head in shame*

I still remember being at the RWA conference in NYC and receiving the call from Emmaline at Rhemalda. She said they loved my mermaid story and wanted to discuss whether we'd be a good fit for each other. Turns out we were a great fit.

They were a new publisher. I was a debut author. We took a chance on each other. And I'm so grateful that we did. I have had a wonderful ride with Rhemalda. Yes, there was a bump or two here and there, but that's the way the publishing business works. (If there are no bumps along the way, you're not working hard enough.)

As some of you know, I chose to self-publish my Kindrily series. What you might not know is that I respected Rhemalda so much that I discussed my plans with them beforehand. I explained I wasn't self-publishing my other series because I was unhappy with them--I was very happy with them. I simply wanted Grasping at Eternity published yesterday, instead of waiting a year or more for the traditional publishing process. (Patience has never been my strongest virtue.) I basically asked Rhemalda for their blessing. Being the wonderful people they are, they wholeheartedly gave their approval and support. And have continued to do so ever since.

Me and my sea creatures planned on swimming along with Rhemalda for the long haul. The Sea Monster Memoirs series was their baby as much as it was mine, and I planned to submit every sea peep book to them and only them. Dangerous Depths, the sequel to Tangled Tides, was accepted and scheduled for release on December 1, 2013.

Cover design started. I've been working on edits and revisions. And then...

And then, an email arrived. A phone call occurred. A couple tears were shed (at least on my part). Wine and too much chocolate was consumed. Rhemalda is closing their doors for business.

I'm breaking up with someone(s) I love, and I don't want to break up. Worse, those someones are going through a challenging time personally with family health concerns.*sad sigh*

The publishing business is difficult nowadays. The big 6 has become the big 5. Small presses are going out of business left and right. Why? Because the system is broken. I could write a whole blog post about how messed up the book return system is and how publishers lose money left and right. How impossible it is to make a profit based on more than a dozen constantly changing factors. But plenty of people have posted about that stuff.

I'm here to tell you that I'm sad to be losing Rhemalda as the publisher of my sea creature stories. I've said it before and I'll say it again: I wish I had won Powerball so I could give them a million dollars and tell them to keep doing what they love--publishing books--and not worry about profits.

But I have never won Powerball, so like all the Rhemalda authors, I have to say goodbye. This scene from Fox and The Hound pretty much reflects how I feel. I'm Todd. Rhemalda is Widow Tweed.

Yes, I'm going to be fine. Yes, I've been set free. But we had so many great memories together. What happens now?

Thankfully, and respectfully, as always, Rhemalda is doing all they can to look out for their authors. They are NOT filing bankruptcy, so all rights will revert back to authors without being held up by legal proceedings. Royalties will still be paid. They are answering any and all questions by phone, Skype, or email, and doing everything possible to guide authors to the best next step for them and their career.

In today's world of increasingly popular "every man for himself" business practices, Rhemalda is demonstrating a lot of class, dignity, and love for what they do, even as they have to close their doors. That's respectable and admirable. I'm honored to have been part of such a stand-up organization, and associated with such talented and kind-hearted people.

I consider myself lucky. I have fond memories. I have a beautiful debut novel that I'm proud of. I learned so much about this business from Rhemalda and my experiences with them. And, the best part, I've met some amazing people along the way. Rhemalda the publishing company is dissolving, but the people are not. Those people will remain in my heart forever.

Now, what's this news mean for my books? Dangerous Depths is still on track to release this winter. Possibly mid-November instead of the original Dec 1st date. Tangled Tides (the first edition) is still available and will continue to be until I release the "second edition" under my Starry Sky Publishing name. To those who have a copy of the Rhemalda version, hang onto them. They will soon be a collector's item. ;)

Dangerous Depths has the same fabulous cover designer who created the Tangled Tides cover, and the same incredible editor. Rhemalda made sure they left me and my sequel in good hands. Again, I'm grateful to them for that and everything else they've done for me.

I would have loved for Rhemalda to thrive and continue publishing my books (and so many others) forever, but as Big Mama from Fox and The Hound says:

"Darlin, forever is a long, long time, and time has a way of changing things."

She's right. We authors have to roll with the changes of this ever-morphing book business. I'm rolling with this big change with a heavy but hopeful heart.

To my beloved readers, I hope you'll keep rolling along with me.
And to Rhemalda, thank you. For everything and then some. I will never forget where I came from.