THE VERY LONG AND TANGLED TALE OF TANGLED TIDES

Okay, so it took me a couple weeks to get over the shock of signing a book deal for TANGLED TIDES. (One of the coolest moments was the first time I read the contract and it said “Karen Amanda Hooper (hereinafter referred to as "Author")” I mean, I can call myself an author all I want, even declare it on my blog, but a legal contract just made it REAL. I am hereby known as an author. )

Many people have told me I have to post the details of how it happened. I’m not really sure what details I’m supposed to include (it amazes me that anyone—besides my mom and close friends—are interested in ANY details) but I don’t want to let anyone down, so to be safe I will start at the beginning. 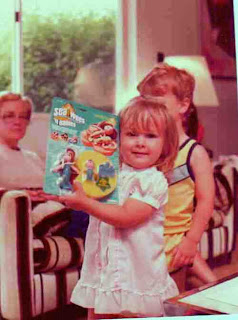 I was super happy because I just opened a gift and it was Sea Wees. They were mermaid dolls that each came with a baby or pet sea creature like a seal or penguin. I collected them and played with them in the tub. (Hey, you wanted details. I’m giving ‘em to you.) As you can see, my love for sea creatures started very early.

Then, when I was about 5 or 6 years old, this movie came out. 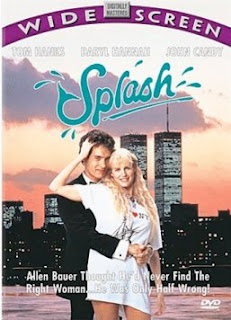 I wanted to be Madison the mermaid. Every time I climbed into my bathtub I pretended I too had an orange tail that magically appeared. (Hmm, is anyone else noticing a tub theme here?)

There were lots of other mer stories, like how I’d swim around our pool with my legs and feet stuck together trying to pretend I was a graceful mermaid (I have no photos of that and thank goodness because it was anything but graceful.) Our pool even had a waterfall and I pretended that behind the waterfall was a secret gateway to Mermaid Lagoon.

Then of course there was The Little Mermaid. 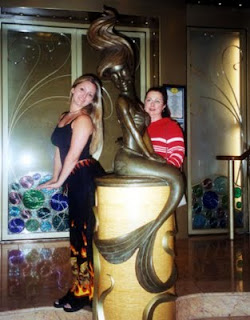 Fast forward to a few years ago, after I had finished writing my first novel, I was walking my dogs with my mom and we came across a neighbor’s sidewalk covered with dead dried-up worms. And I thought, “How sad. They never made it to the other side.” And WHAM! There was my next book idea. (Worms=mermaid story? Yup. I told you, I am a twisted little pixie with a very unique thought process.)

So I wrote the tale. In less than a year. I sent it to my CPs. They asked questions, made comments, and the story became better and my CPs said, “this is it! Agents are going to fight over this.”

In April of 2010, I confidently queried agents. I got LOTS of requests, many compliments, and not one offer. One agent even said, “I know I'll be kicking myself but..." (I’m still not sure what that means but I think it was a positive thing?)

Defeated, and a little depressed, I shelved my sea peeps. And I worked on another story.

Then, in May of this year, a few writer friends all sent me a link to the same USA Today article about mermaids being the next big thing. All of them suggested that I self-publish my story. I figured I must have received the same message from several people for a reason. It was a sign to put it out in the world regardless of the fact that it got so many agent rejections. It’s not like I’d ever query it again, so what did I have to lose?

Andbutso, I emailed two author friends who had self-published stories and I asked them about good sites or blogs they’d recommend for me to learn how to self-publish. They were both amazingly helpful, but one of them, Michelle Davidson Argyle told me to wait. She suggested I submit it to her publisher before I self-pubbed. So I did. Thinking, meh, one more industry rejection won’t kill me.

A couple weeks later, I was at Barnes & Noble on a Saturday night with one of my CPs and another writer friend. We were hanging out in the YA section and I was pointing out any and all mermaid stories when an email chirped through on my phone. It was Rhemalda Publishing. They read my query letter and first 50 pages and they wanted me to send the full to them and their review team. (And yes, of course, we went to the bar next door and had celebratory drinks.) That’s when hope kicked in. But I quickly put it back in check because I had a folder full of rejection letters that said no to the same story they were about to read.

A few weeks later, as I was packing my bags to go to NYC for the RWA conference, I received an email from Rhemalda that said “We enjoyed your story and would like to schedule a time to talk on the phone.” But a time that was mutually convenient for both of us was DAYS away. The scheduled phone time was on a Friday afternoon. The wait was mental torture.

Fast forward to me, standing in line waiting for a cab in NYC, (plans changed and I wasn't alone in a quiet place like I should have been). That’s when and where I heard the words “we love your story and want to publish it” for the first time ever in my life. 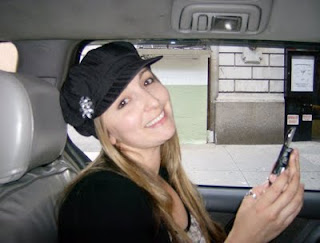 (This was me in the cab, calling Mom and Prince Charming to tell them the news.)

I wanted to jump up and down. I wanted to cry tears of joy. A publisher loved my story. MY story. My beloved tale of battling merfolk and selkies who are hot and cold, good and bad, sexy and sinister, and trying to survive in a realm where victory seems impossible and hopeless. (Hmm, sounds kind of familiar.) My sea peeps were going to make it! They were going to be released into the world! By a publisher who believed in them! Even over the hustle and bustle of people and honking cabs in NYC I could hear my merfolk, selkies, sirens, and gorgons, cheering and splashing around in celebration down off the Florida coast.

However, the publisher needed approximately an hour to talk to me. They wanted to go over some things, ask each other questions, and make sure we were the right fit for one another. So we rescheduled for the next day.

RWA ended. I rushed to the airport early, found a non-crowded hallway with an outlet to plug my phone into, sat on the floor with my notepad, and waited for the call. Over an hour later, after a lot of exciting conversation, I had a numb butt and a publisher for my story (which Rhemalda suggested needed a new title and I wholeheartedly agreed). 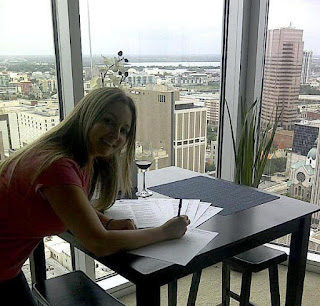 A few days later, the contract was signed.

A couple days after that, TANGLED TIDES became my book's official title.

On May 31st, I threw out one last lifeline for my story. On July 8th I signed the book deal.

If I can do it, anyone can. The publishing industry is an infinite sea of unpredictability, but as they say in Finding Nemo, we writers have to just keep swimming.