On Saturday I shared ten anecdotes about me or my life. One was a lie. I have to admit I enjoyed reading all the guesses about which one was made up because most of you were WRONG. This means I am a convincing story teller. Now I can proceed with chasing my dream of being a fiction writer with confidence. Thanks folks.

If you didn't read my ramblings you should go check them out BEFORE you read my answers below. Seriously, some of them are pretty craptastic if I do say so myself. And if you read the answers without knowing the stories this post won't be very entertaining (or make much sense.)

Now, onto the not-so-big reveal.

The majority of you guessed #7 was a lie.
Poor Mrs. Smith eating the million dollar M&M.
Sadly, and I can't imagine how often she must think about it; it is TRUE. I can hear all of you gasping and sighing for her. Wherever she is I'm sure she appreciates the sympathy--and is still trying to erase the incident from her mind.

We'll knock out the rest of these bad boys in order:

1.) I write in all capital letters all the time.
TRUE! Crazy, and yes it may sound too time consuming, but it's just the way it is. I do sign my name (in cursive) with lowercase letters when it's absolutely necessary, but that's the only exception. If you receive a card or letter from me you're going to see KAREN printed in all caps with some sort of doodle or fancy line under it.

2.) Aussies and Brits are like coffee and chocolate to me.
TRUE. Duh. I mean how many posts and/or comments have I swooned over someone or something of the British or Australian variety?

3.) I elbowed a famous superstar choreographer.
A few of you were hoping this was true. Not so much the elbow part, but the getting to dance with Sonya Tayeh aspect of it. Sleep easy tonight. It's TRUE. She even agreed to take a photo with me after I accidentally assaulted her. PS: I also danced with Sabra (winner of season 3). 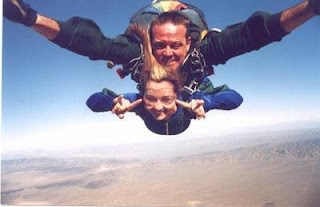 4.) I landed my first solo skydive perfectly with no radio assistance.
I could only find a photo of my tandem jump, but the AFF solo landing is TRUE. I even have my jump log with my instructor's comments to prove it. He wrote, "PERFECT LANDING with NO RADIO." I didn't even ask him to write in all caps.

5.) I blew my chance to possibly be on the first season of The Amazing Race.
*Head to desk* This one really stings because I just watched the newest episode last night. *Deep inwardly sigh*
It's TRUE. *Shakes fist at the sky* We don't need to say anything else about this. It's just too painful.

6.) I had such horrible hives that I looked like an alien.
Dumb. My own idiotic fault for overdosing on Aleve, but TRUE. Come on, they couldn't all be spectacularly shocking. I wish I had a photo though. You would either have nightmares or a great image for your next sci-fi/fantasy character.

7.) No photo, but let's all give one more sympathetic groan and head shake for Mrs. Smith. She wishes someone took a photo of her with that M&M, and a pic of the bag with the serial number. I wonder if she ever ate M&Ms again. I wouldn't. It would be too painful. 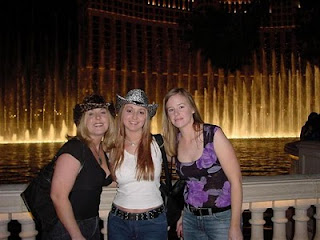 8.) I won $720 in one shot of roulette.
TRUE. I couldn't believe it either, but I swear it happened. My two girlfriends can confirm it. They were a tad jealous and in disbelief at first but we love telling the story.

9.) A house I almost bought was leveled by a hurricane months later.
Cleverly Inked was the only one to guess correctly. THIS IS A LIE. I didn't get the house, but that was only 4 years ago and thankfully, no major hurricanes have hit my area of Florida since I moved here (knock on wood). These are the kind of stories I create to make myself feel better when crappy or disappointing things happen to me. Speeding ticket? It happened because if I hadn't got the ticket, I would have caused a 10 car pile up and people would have been hurt and possibly died. Then I'd have to live with that guilt and agony all my life. Extreme? Yes. But it makes me feel better about paying the $200 ticket, not getting the house, etc. 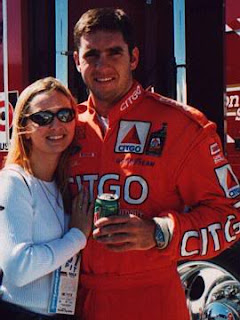 So there you have it.

Some of these events would have never happened if I had done one thing differently, or made a different choice, or chose another path, but that's how life is. Cause and effect. Synchrodestiny. Some good, some bad. You roll with the punches, you learn from the supposed mistakes or missed opportunities, and you hope that in the end there might be a happily ever after. Or, at the very least, that you'll be able to tell some damn good stories.
Posted by kah