Cover Reveal! -- THE ONLY ONE by Magan Vernon


***The companion novel to The Only Exception. This is NOT a sequel, but takes place two weeks after Monica and Trey's debate and is Melanie's story.***

Honor student, manager at the campus coffee shop, owner of an impressive sweater collection – Melanie Wilder has it all together. Then John “John Boy” Walden strolls into her life wearing nothing more than an impish grin and all-too-revealing loin cloth.

Soon, make-out sessions replace homework, lust triumphs over work. And to further crumble her perfect world, an unexpected phone call threatens to take away everything she’s worked for.

Now, as Melanie struggles to pick up the pieces, she realizes that John may be the only one to put her life back together…unless he shatters it first. 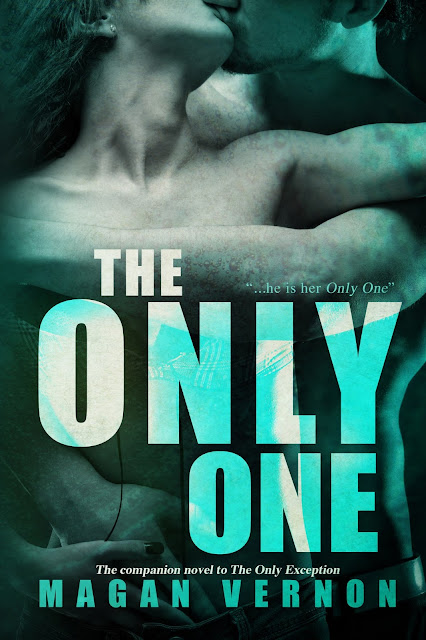 And the full wrap 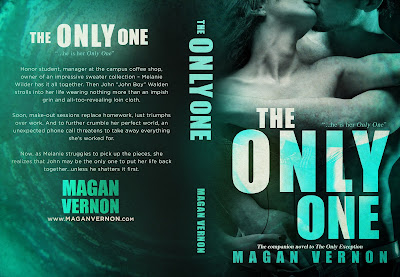 You can add it to your GoodReads NOW. But I'm guessing you need more convincing? Okay, how about a teaser of the first chapter?

I looked around the basement, sipping whatever concoction some guy poured out of a cooler. He called it a ‘magic potion’ and I hoped that didn’t mean he rufied it. I don’t know how Monica talked me into this.

A horde of girls clad in nothing more than lingerie pushed past me as if I were nothing more than another one of the paddles on the paneled wall. I tried to steer away from them, but then I came face to chest with a set of abs and felt all of the magic potion cascade down my cardigan.

I gasped once the cold liquid soaked through both layers and hit my skin.

“Too bad, that was such a nice sweater…” a deep voice said.

I looked up, all the way past the chiseled six pack to cool blue eyes. “Maybe you should just take it off up in my room and I can help you dry off.” He leaned in, his full lips right on my ear. “Or make you wetter.”

My breath caught in my throat, rendering me speechless. Luckily my best friend Monica jumped between us, pushing the guy back so I got a full view of him and realized he was only wearing a loincloth and a large smile.

"Down John Boy." She scowled at him and then turned to me, almost knocking her beret off. "What the hell happened to you?"

Monica's eyes narrowed as she looked down at the red liquid soaking through my gray sweater. She whipped her head around to the loincloth clad guy. "Was this your fault? Are you trying to get my friend naked?"

He held up his hands, a cockeyed grin on his face. "Purely an accident, Lib."

Ah, now I knew where I’d seen him before. He had come into the coffee shop we worked at a few times. I don’t think he even glanced in my direction more than to hand me his student ID to pay, but was always calling Monica ‘Lib.’ I’m guessing because she was an extreme liberal.

Monica's boyfriend, the governor's son Trey Chapman, pushed through the crowd. When I usually saw him he was polished in dress pants and a dress shirt, but his Halloween costume was nothing more than a pair of American flag boxers, a dress shirt, and some gray hairspray. He looked ridiculous. I still don't know how Monica talked him into the Clinton and Lewinsky couples costumes.

"Hey, I’ve been looking for you." He slipped his arm around Monica's waist. "What's going on here?"

"Your big brother here spilled a drink on Melanie to try and get her naked."

"Fine?" Monica raised her eyebrows. "That Hermione costume you've been wearing since middle school is covered in ever clear and Kool aid. That’s not fine."

"I haven't worn this since middle school!" Okay, truth was, it was my go-to costume. I bought it for the first movie's midnight showing and wore it for every movie opening and Halloween since.

"Whatever." Monica turned her head to Trey and tugged on his shirt. "You can just wear Trey's shirt."

Magan Vernon is a Young Adult and New Adult writer who lives with her family in the insurance capital of the world. When not writing she spends her time fighting over fake boyfriends via social media. You can find her online at www.maganvernon.com.