I have fantastic friends. It's true. They are talented, and kind, and just all around awesome. Today, I'm celebrating the sweet and mega talented, Heather McCorkle's recent release of Channeler's Choice. 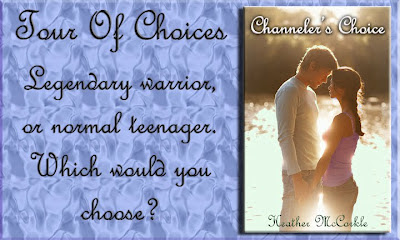 Released (officially) February 27th in hardback and eBook, Channeler's Choice, the sequel to Heather McCorkle's earth-conscious urban fantasy, The Secret Of Spruce Knoll (which was incredible and you should go read it SOON--preferably now, but finish reading this post first). To celebrate she's doing a blog tour from February 27th through March 15th along with a giveaway. Here are the prizes:

An eBook of Tangled Tides by Karen Amanda Hooper (Yes, that's me!)

An eBook of Running Wide Open by Lisa Nowak

An eBook of Beautiful Demons & Inner Demons by Sarra Cannon

An eBook of Bound by C.K. Bryant

If you don’t have an eReader then you’ll definitely want to stay tuned on Heather’s blog for a HUGE giveaway taking place at the end of the Channeler’s Choice tour.

I KNOW! What an amazing array of books. You KNOW you want to enter, so here's how: Stop by Heather's blog for official details. http://heathermccorkle.blogspot.com

Here is a bit about Channeler's Choice:

With her parents’ murderer’s dead, Eren can finally concentrate on fitting in at Spruce Knoll High, not to mention figuring out what it means to be a channeler. If only it were that easy. It turns out she isn’t normal even among channelers - she may be a legendary warrior meant to protect the earth in a last great battle.

But Mayan prophecies are the least of her worries as she involuntarily starts to gather her own Society, another girl moves in on Aiden, her powers rage out of control, and worst of all, someone is stalking her. To top it all off, Eren discovers she doesn’t have to be a channeler after all - she has a choice.

As an old threat closes in and she risks ending up like her parents, she is forced to decide. Be a normal teenager and leave the legendary warrior stuff to someone else, or embrace a dark destiny?

It can be found here: