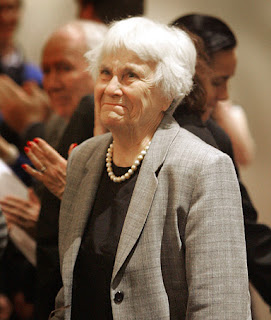 To Kill A Mockingbird was published 50 years ago this month.
One of the classics.
The only book Nelle Harper Lee ever had published.
Nelle is now 84 years old.
What I wouldn't give to have one of my stories published--much less to celebrate it's 50th anniversary.

Southern Living magazine has a heartwarming article about Nelle and the anniversary celebration they're having in her hometown, Monroeville, Alabama. Go read it. You'll learn some great stuff--like how Nelle hates being famous--and you'll smile a few times.

My favorite part of the article was near the end. Pat Dye was talking to Nelle and paying her one of the highest compliments you could give an author. He told her she wasn't smart enough to write a book like To Kill A Mockingbird

I know, at first that doesn't sound like a compliment, but maybe you'll understand once you hear the rest...

Something for us writers to think about next time we sit down at our computers. Heart, Soul, Guts, Passion= A classic recipe for greatness.

Happy Anniversary, Nelle. You are an inspiration.

This just in: The royal Courtney, aka Southern Princess, is also celebrating TKAM's anniversary on her blog. AND she's giving away awesome prizes. Be sure to stop over and enter.