Requiem for a Review by Katie French


Today, I have a special guest post by the awesome Katie French. Lately there's been a lot of talk about reviews and sock puppets. If you've been following the drama then you know what sock puppet means, if not, read on...

Reviews have caused quite a stink in the writing community lately. In the span of a few weeks there were two scandals. The first involved Todd Rutherford of the former GettingBookReviews.com and his paid reviews system. The article in the New York Times  went on to claim that one third of all reviews on Amazon were fake, bought and paid for, leaving everyone to wonder if any customer review should be trusted ever again.
The backlash to this caused many customers to believe only the lowest reviews, surmising that because it is a bad review it has to be correct. However, the next scandal put that theory to test when E.J. Elroy was exposed for using “sock puppets” or pseudonyms on Amazon and other reviews sites to bash his opponents and praise his own work. Elroy, a bestselling British author, admitted the act and apologized, but the backlash to this dishonesty has just dumped more doubt on Amazon reviews across the board. How many authors used this tactic and just haven’t been caught? How can we believe any review we read ever again?
Katie French

Amazon is reacting, clamping down on its policies-- advertising when someone uses their real name, letting us know that they have a confirmed purchase of a book. However, those will not stop someone determined to trick the system. So, what can a book buying fanatic like myself do? How can we deal with the rampant lies slathered across our Amazon review pages? How will we ever know if a book is good enough to purchase?  My personal opinion is we do absolutely nothing.
I’ve spend a lot of time perusing Amazon books in the genre in which I write. Almost all of them carry a rating of around 4 to 4.5 star rating. All of them. So the star ratings don’t sway me. The number of reviews may peek my interest, letting me know that many have purchased this book instead of few, but usually that means little as well. I may read a few of the top reviews (even though I have no idea if they were written by the author’s mother or an honest reviewer) or I may not. What I mainly consider is if I like the cover and the blurb, if the story calls to me in some deep down, gut wrenching way, if the characters seem to pop off the page and if the setting is spellbinding. If those things are there, then I’ll buy it, reviews be damned.
There will always be rule breakers. There will always be those who try to cheat the system. I don’t think Amazon can create a filter that will stop the pin heads of the world. But in the end, giving yourself good reviews can’t make you write. That takes grit, determination and thousands of hours at the keyboard. No sock puppet will get you there. 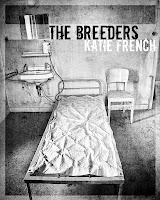 Katie French is the author of the debut book The Breeders, a YA dystopian adventure available now on Amazon. She is also the co-creator and contributor with Underground Book Reviews, a site that seeks to promote quality unpaid book reviews to self-published and independent writers. Her passions are her family and her work with at-risk teens. You can find her at www.KatieFrenchBooks.com or on facebook.

GIVEAWAY ALERT! We're also giving away an ebook of Katie's YA debut, THE BREEDERS. All you have to do to enter is leave a comment and include your email address. For 5 extra entries tweet this ready-made tweet:

Read Katie French's thoughts on the recent book review drama and enter to #win her #ya debut, THE BREEDERS. http://karenamandahooper.blogspot.com/2012/10/v-behaviorurldefaultvmlo.html
Posted by kah