A SECRET, CUPCAKES, AND MY UNDERWEAR

***awesome cupcake pics used to be in this post but due to the recent lawsuits for using photos on blogs I took them down.***

I'm going to let you in on a secret that will change your life.

Last year, me and Natalie Bahm were querying at the same time. (Side note: Nat landed a fabulous agent, Sara Megibow of the Nelson Agency. As for me, umm, well, let's get back to the point of this post.)
We, and the rest of our writing group (Megan Rebekah and Marie Devers) decided rejection was an ugly word. It was no fun to email updates saying, "Agent SoAndSo rejected me."
Rejected.
Rejection.
Reject.
There's something about those words that make you feel like you've just been slapped in the face, or punched in the gut. We didn't like it. So we did something about it.

We decided the new word for rejection was cupcake.
Rejected=cupcaked.
Instantly, our lives sounded sweeter. We sent emails that said things like...
Agent ShortBread cupacked me.
I got three cupcakes today.
Agent PermaFrosting cupcaked me, but she invited me to send her any of my future recipes.
It took months to bake, but I finally got a cupcake from You CAN'T Have Your Cake Or Eat It Too Lit Agency.

See, it doesn't sound so bad when you add some sugar, does it?

I even shared the Cupcake Secret with a few close writer friends. Sara McClung , Carolina Valdez-Miller , and Shannon Messenger have been in the elite Cupcake Clan for quite some time now. They speak my language. They know if I tell them I got a cupcake, it means I'll be needing some of this...Yes, they have a Cupcake brand of wine to help cupcake receivers cope. Coincidence? I think not. I even have an appropriately sized glass that I use if I get a cupcake on a full MS. 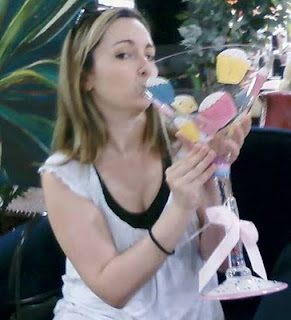 Sara sends me cupcake themed gifts (I'm not sure if that's a good omen or not, but they sure are cute!) 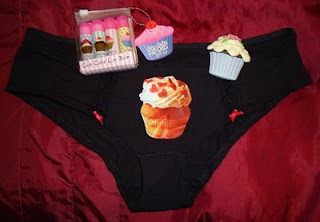 See, I told you this post involved my underwear. Thanks for the cute nickers, Sara!

It truly does sound good in theory--this whole cupcakes craziness. BUT(T), even with the cute underwear, the delicious wine, the sugary sweet wording, and all the other upsides of the cupcake way of life, the literary world cupcakes don't taste very good. Most days they are still hard to stomach. The worst part is, I've started looking at cupcakes much differently than I used to.

Some days I think this is the only good use for them.
They never look this cute or interesting in my email box.
On days when I'm really emotional, cupcakes seem mean and destructive. Kinda like this one.
I see stuff like this,
and think, umm, that's an oxymoron if I've ever heard one.

Sometimes I raise my fists in the air and shout, NO MORE CUPCAKES!

(At least until I recover from my sugar crash).

So, now you know. We are sharing our secret with you because we think this new terminology would make the writing world a happier place. We give you permission to remove the words rejection, and rejected from your writer vocabulary and replace it with cupcake and cupcaked (if you so choose).

Some days it will help the road to being published seem a little sweeter, but there will be days when it feels like you've been smacked in the face with a stale, 5 tier, schnozberry filled cupcake. The icing will burn your eyes and clog up your nose so that you can't breathe in or out, and you'll think, "This is it. This is how it ends. I've been cupcaked to death."

Fear not. Cupcakes will not be the death of you.

Take a moment to wear each one proudly. You worked hard for them! You've earned every cupcake! However bitter or bland it may be, try to enjoy whatever yummy part you can salvage, then ask a writer friend to hand you a few napkins. After you wipe away all that unwanted icing, put on your Brave Girl (or Guy) cupcake panties, celebrate your step in the right direction with a bottle of Cupcake wine, and keep persevering.
Posted by kah