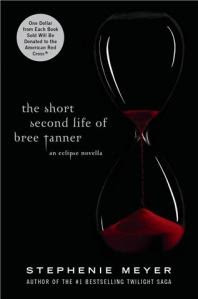 This morning I read about Stephenie Meyer’s new novella that’s being released on June 5th. The Short Second Life of Bree Tanner: An Eclipse Novella.

It’s the story of Bree Tanner, one of the newborn vampires featured at the end of Eclipse.

Apparently I wasn’t paying attention to the thirdary (yes, I’m making it a word) characters, because I don’t remember Bree. If Bree was a secondary character I might know who this novella is about, but honestly I barely remember the newborn vampires, much less that they had names.

Does this mean I’m a bad reader? Or, does it mean that any character in our stories has the potential to evolve into more important characters with their own story to be told.

My uber fantastic writing group pointed out a character in my latest MS that didn’t need to be there. I gave this character her own whopping big POV and everything. Then I found out I had to kill one of my darlings. My story would be better for it. When my writing group speaks, I listen.

Maybe some day, if my WIP gets published, my story will turn into a series. My recently killed darling could appear in book 2 with her own big role, issues, arc, and all that other fun stuff. She’s a fabulous character. She has a great story to tell. BUT, not right now. In my current storyline she became a distraction, and interruption, and if I would have insisted on keeping her she most likely would have been forgotten by readers.

I’m sure many readers do remember Bree, so I’m not knocking her role in Eclipse. I think I may have skimmed over any scenes that didn’t include Edward, Alice, Jasper, or Emmett. And really, I was just trying to find Edward most of the time.

I’m sure this new novella will be great. It’s that next quick fix of Twilight that fans need, and I’m sure I will read it so I can find out who the heck Bree was and what’s so important that she has her own novella. BUT, my real—and most important—question is, will Edward be in this book?
Posted by kah